Help • Terms of Use • Wanted Pages • Categories
Welcome to the wikia devoted to the now classic ABC-TV comedy series that anyone can edit! 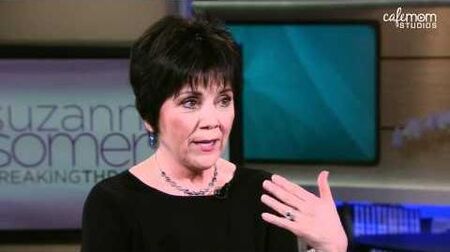 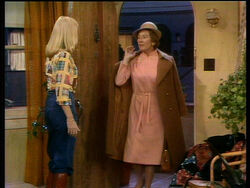 And Mother Makes Four was the second episode of Three's Company. The story was originally served as the second pilot episode idea for the series. The original pilot, that was produced by M*A*S*H series co-producer Larry Gelbart, stuck more closely to the storyline and character names featured in the series' 1973-77 British TV counterpart, "A Man About the House." It was directed by Bill Hobin, the episode aired on ABC-TV on March 24, 1977. Read more >>

The Three's Company Wiki wiki is a collaborative fan tribute website to the sitcom Three's Company, which aired on ABC-TV from 1977-1984. Actor John Ritter, who played Jack Tripper, won two Emmy Awards for his acting on the series.

Three's Company is an American sitcom was aired on ABC-TV, based on the BBC sitcom Man About The House, which was produced and written by British screenwriters Johnnie Mortimer and Brian Cooke. The series premiered on March 15, 1977, and ended on September 18, 1984. The show is about an aspiring cook Jack Tripper who is able to move into an apartment with two young women, Janet Wood (Joyce DeWitt), Chrissy Snow (Suzanne Somers), who live in the Santa Monica area after convincing the gruff landlord, Mr. Roper (Norman Fell), with the help of his long-suffering, sex starved wife Helen that he is homosexual. Later on, The Ropers sell the apartment, and the brother of the owner of the property, Ralph Furley (played by Don Knotts of The Andy Griffith Show fame), a self-professed ladies man, becomes the new manager, then after Chrissy moves back to San Francisco, and at first a clumsy cousin, Cindy Snow moves in, and then after she moves out to attend college at UCLA, and a practical nurse, Terri Alden (Priscilla Barnes) moves in, antics continue at a frenetic pace, all the time providing big laughs! Throughout its eight seasons, the sitcom ran for 174 episodes, winning two Golden Globe Awards, one Emmy Award, which was won by John Ritter for Outstanding Lead Actor in a Comedy Series in 1984, the series final season, and two People's Choice Awards during its run.

Go to these sites for info or for help with your own wiki!

ABC • A Million Little Things • Agent Carter • Agents of S.H.I.E.L.D. • The Baker and the Beauty • Black-ish • Castle • The Catch • The Colbys • Designated Survivor • Desperate Housewives • Dynasty • For the People • Fresh Off the Boat • The Good Doctor • Grand Hotel • Grey's Anatomy • Happy Endings • The Heiresses • How to Get Away with Murder • Inhumans • Lost • The Middle • Modern Family • Nashville • Once Upon a Time • One Life to Live • Pretty Little Liars • Private Practice • Quantico • Revenge • Roseanne / The Conners • Scandal • Station 19 • Supernanny • Twin Peaks • Who Wants to Be a Millionaire

We are always looking to expand the contents and make improvements to this website... Why not help out, and contribute to this wiki! To write a new article, just enter the article title in the box below. 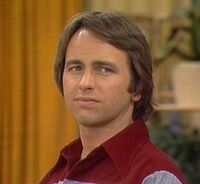 Jack Tripper is the male roommate on the ABC-TV sitcoms Three's Company and Three's A Crowd, based upon the character, Robin Tripp, of Man About The House and Robin's Nest. Jack was played by John Ritter. Jack served in the United States Navy. He was discovered in Janet and Chrissy's shower on the morning after a party they threw. Janet reasoned with the landlord, Stanley Roper, and he agreed that Jack could stay because they thought he was gay. Read more >>

Welcome, fans!! Welcome to this Wikia, we welcome any contributions! We invite you to log in and create a user name.

Creating a user name is free and takes only a minute and it gives you greater Anonymity: if that is your wish. In addition, it is easier for other contributors to ask you questions and help you.

for an outline of some of the main parts of the site and links to pages that show you how to edit.

At one time, it seemed undeniable that we preferred slightness on TV during the hot weather ... wrestling more deeply with the themes of “Three’s Company” during a second viewing....

Now, Kline returns to Westport Country Playhouse in the comic satire, “Straight White Men,” on stage May 24 through June 5. Directed by Playhouse artistic director Mark Lamos, and written by Young ......

It’s a good bet that when you see or hear the name Richard Kline, memories of his eight-year run as Larry Dallas on “Three’s Company ... Plus, being on a series for eight years is ......

Netflix’s hit period-drama “Bridgerton” is skipping over a main character’s love story to focus on two other series regulars. Netflix announced on May 15 that Season 3 will focus on the romance ......

That was the last time I kinda got turned on by thinking about doing a series again ... doesn’t have the same appeal as doing a Three’s Company reboot with John Ritter’s actual son....