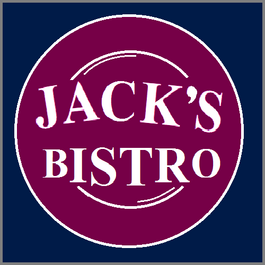 Jack's Bistro is the name of the restaurant Jack Tripper owned in Seasons 7 and 8 of Three's Company and in Three's a Crowd.

Origin of the Name

Jack's Bistro is the name absently suggested by Mr. Furley after the "anonymous" suggestions "Froggy's," "Babette's," "Voulez-vous," and "La Grande Cuisine," all failed to impress Jack.

Mr. Angelino, was trying to find a way to unload or to lease an abandoned restaurant he owned in the Three's Company episode titled "Jack Gets His" in Season 7, when Jacked walked into his office. In the very next episode titled "Opening Night", the restaurant, which needed lots of cleaning, repair and renovation, was Mr. Angelino's rather duplicitous opportunity, if not for anything else other than the fact that he didn't know what else to do with it, to give Jack the chance, nevertheless, to run his own restaurant. Anyhow, in the "Opening Night" episode, the first months' rent was due in three days, For help with the cleanup operation, Jack was able to enlist Larry, who pretty much only "supervised", and the gladly-willing roommates and Mr. Furley, who lent Jack the $800 needed to pay off Angelino in order to purchase his stake in the venture, which was 90%.

The roommates Terri and Janet Jack, along with the help of Furley, worked feverishly to get the Bistro cleaned and ready to open in time while Larry, who was preparing to meet his visiting family that was in town for a reunion, made a mistake in the printing of the flyers for Jack's Bistro, having it opening a week later. Guilty about his mistake, he guides his Greek family, The Dalliapolouses, to the Bistro, which turns out a big success, minus the broken dishes, which is the way Greek families celebrate! After Larry's family pays for all of the broken dishes, and the first month's rent is paid to the demanding Angelino, the Bistro proves to be a big smash success, netting a big profit for Jack!

The building located at 834 Ocean Vista Boulevard in Ocean Vista is later sold to James Bradford.[1]

Janet and Terri try to persuade a cop (Stanley Kamel) who thinks they are trying to solicit him, to eat at the bistro.